Do you want to know what one of the biggest challenges of my childhood was? When I played ‘rock, paper, scissors’ with my friends, and I had rock, they would beat me with paper! And I would think to myself: if a rock can destroy a pair of scissors, and scissors can cut paper, why can paper merely cover rock and take home the trophy? Why is it assumed that paper is stronger?

This thought has resided with me, honestly, up until today. Only a few moments ago had I been able to recall the joy I felt as a child flying paper kites with my auntie, or that feeling of turning the thinning pages of the Qur’an for the first time. The day I started reading the newspaper – and I mean really reading it – and I realised the world we live in is a terrible, horrible, no good, very bad place, which leads to the night I realised the healing power of putting pen to paper in a highly digital era.

Today there are more paper trails than anyone can count. The power of paper is translated through the history we know and the history we write. Paper shapes tomorrow; it’s uses are endless, from the photocopier to the toilet. It can be used to plan our decisions, plan our futures, however it also controls us…

Paper is an instrument of tyranny – a contraption used by the government to gain control over us.

Paper. Paper is the auto registration we must show, the insurance we must show, the tax forms we must file, the passport we must own and the birth certificate that proves our existence. Whether we know it or not, we are continuously submitting to paper.

These ideas are presented in the poem ‘Tissue’. The poem ‘Tissue’, written by Imtiaz Dharker, is the first of the 2006 collection, ‘The Terrorist at my Table’. If we look at the first lines of the first stanza, they read – “Paper that lets the light shine through, this is what could alter things” – already the writer is suggesting that paper has the power to effect change. The imperative verb “let” suggests a sense of authority and control and the fact that the writer starts with the noun “paper” emphasises its importance in the change to be made. Since the poem is so full of symbolism, we might have to take a few steps back and look at the title. So, what is tissue? Yes, it’s thin paper but it’s also what makes up our organs, what makes up us. Here the writer uses paper to symbolise human life and essence, and therefore, through this double meaning, the metaphor suggesting that the power of paper is human power is exemplified clearly. If we keep this in mind, the poem is much easier to understand.

In stanzas two and three, the writer uses enjambment as each line continues onto the next. The freedom in structure presents the freedom we find in paper as well as the freedom we have as humans; however, it can also reflect the lack of control mankind actually has. It undermines the order we try to put in place and reveals our attempts at control are futile. 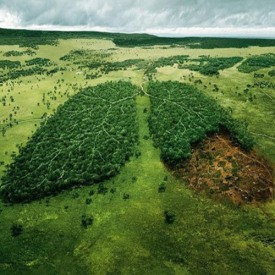 The last lines of stanza three read – “paper smoothed and stroked, turned transparent with attention”. This suggests that our frequent use of paper allows us to gain more knowledge and see more deeply, the more we devote ourselves to our own growth. The sibilant “s” sounds in “smoothed and stroked” suggest this is a soothing comforting process; however, it can also mimic the sound of machinery cutting down trees to obtain paper. This suggests the writer recognises the destruction we cause as humans to gain power. The conjunction “and” shows she understands this is a continuous process and how the more attention we give paper, the less concentrated the world’s forests will become. The adjective “transparent” means to be see through; however, when thinking in terms of people rather than paper, it means to be clear and honest. This could be the poet cleverly exposing those in power such as government organisations who need to be more explicit.

In the next stanzas, the writer lists the different uses for paper such as for maps and “fine slips from grocery stores”. Here we start to realise that all paper is an act of man, used to gain some sort of power or control. Maps divide the natural world, man chooses to segregate countries with borders; receipts are proof that money is what makes the world go round and that money dominates. The use of listing also presents our desire for order. In the lines “fly our lives like paper kites” the writer is suggesting that we are letting something so fragile and something that can be so easily distorted dictate our lives. This suggests our fragility and that our power won’t last forever and is not permanent.

So the question is: what are we so desperately trying to gain control over? What holds the true power?

This poem is a critique of human power. “Paper that lets the light shine through, this is why could alter things”, “the sun shines through”, “daylight breaks through”. Imtiaz Dharker uses light imagery to symbolise nature and therefore suggests that all these attempts are merely mankind trying to exert power over nature, a force that cannot be dominated, a force that will always overpower mankind.

The last line of the poem is particularly powerful – “turned into your skin”.

This line is isolated within its own stanza which emphasises its significance. Here, the author is highlighting that human power is fragile, like tissue. The power we find in paper or the power we think we hold as mankind, is all a facade – an illusion. She could also be referencing the consequences that come from our self-serving nature, implying that blame’s tattoo is marked on our skin. The 4 billion trees massacred annually, the 137 species that continue to become more and more extinct every day – the blood is literally on our hands!

So, when will be begin to appreciate paper and the things it has to offer? When will our mindsets and attitudes change? The games we play like ‘rock, paper, scissors’ reflect the lives we live. Will we ever break the rules, accept our defeat to nature and let rock take home the trophy?

View all posts by mcassemgba